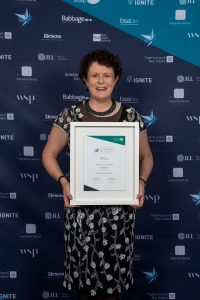 During the awards ceremony, the judges cited Ms Freeman’s win as recognition of her continued dedication and contribution to the property industry. “Working in several roles throughout her career, she has provided strong, strategic thinking to both the private and public sector. Not afraid to tackle the hard issues, her continued commitment to better the industry is to be commended, and makes her a perfect recipient for this award.”

Ms Freeman, who also created the concept of what is now realestate.co.nz, appeared on The AM Show earlier this week, to discuss ‘land banking’ in Auckland. She also highlighted the siloed approach to fixing Auckland’s housing crisis. “Nobody in any individual sector can solve the housing crisis on their own. You have everybody from Government, council, private sector, developers, iwi, the community housing sector and the finance community… somehow we have to find a way to bring them together, to implement a collective housing plan for the city.”

Following the launch of her independent not for profit organisation last year to solve Auckland’s housing crisis using a collective approach, she has attracted increasing interest from key industry players in New Zealand and abroad. In August this year, the first independent Auckland Housing Summit was held. Chief Human Rights Commissioner David Rutherford, was one of the speakers to address the 130 participants.

The Summit marked the first step in a collective call to Aucklanders, to connect and brainstorm the way forward. “There’s no silver bullet on its way, so we’re taking the lead from other countries who have successfully solved similar problems using a ‘collective impact’ model,” says Ms Freeman.

One example is the award winning US based ‘100,000 Homes Campaign,’ a national movement that housed 105,000 homeless Americans over a four year period. This was achieved by the commitment and collaboration of multiple organisations who left any political agenda at the door and pooled resources and expertise.

In New Zealand, the same model was used by The People’s Project in Hamilton. In 2014, a goal was set to end homelessness in the city by 2016. Through the collective action of local and central government, and not for profit organisations, 254 people were housed in just two years with support provided to 311 people seeking housing solutions. Of those housed, 94% remain in their own homes two years later.

Ms Freeman says she is humbled by the award and is thrilled to be able to ‘give back’ via her philanthropic initiative. She is continuing to meet with industry partners as momentum to implement the collective impact solution builds.

“The goal is to establish a new not for profit organisation that would be run in a disciplined and business-like manner. Whilst central and local government would be key stakeholders, the organisation would be neutral, driven by solutions rather than politics.”

Such an organisation would be governed by a group of influential champions to provide clear leadership for the city, says Ms Freeman.